This page is to document "what Tiki does". For "what Tiki should do", please see corresponding page on dev site
(Cached)

Since the removal of all MapServer-specific code in Tiki 15, there is no longer a Map feature that can be set on or off as such, but there are a number of map-specific configurations that can be set in the Maps administration screen.


With the use of the Map wiki plugin and other associated tools you can display interactive maps of any area in the world than can be panned and zoomed, as well as having editable objects placed on top of the map layer using complex programmable logic.

Tiki combined with this feature can be thought of as a Geospatial Content Management System (GeoCMS).

The following sections provide some further detail about the historical evolution of the map capabilities with PluginMap providing more detailed information on usage methods.

It must be emphasised, however, that from Tiki12 onwards the use of MapServer is not recommended and, as mentioned above, it has been completely removed from Tiki15 onwards.

In Tiki12, all Google Maps specific code was removed in favor of using OpenLayers, so Google Maps is accessible via the OpenLayers Google Layer. In addition the Natural Access project added further new capabilities to upload any existing line and polygon data as files and to be able to further customise how data objects were shown on the underlying map layer.

There have been many fixes and improvements which were done for the CartoGraf project, an interactive web-based mapping application to enhance learning in history and geography classes in high schools. CartoGraf is mainly based on Maps, Drawings, PluginAppFrame and Trackers. This is a great example of how to use profiles to use a general purpose app (Tiki) to make a very specific application (CartoGraf).

See the page Geolocation, which tell you how to use the several options to geolocate tiki objects. 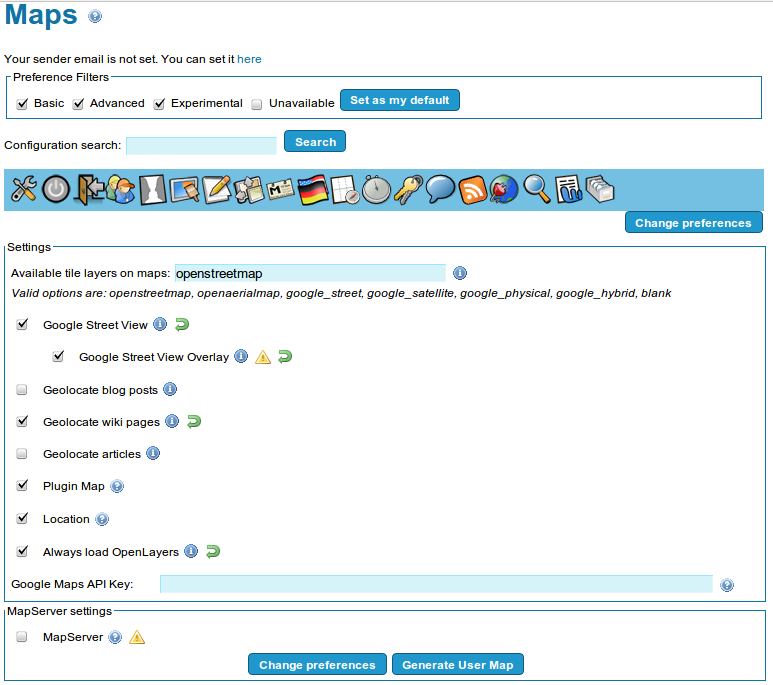 The system was based on the Mapserver software from the University of Minesota. Tiki provides a nice, easy and integrated interface to the Mapserver.


This system can be part of an e-government initiative.

However, enabling this feature is not trivial (yet) as it requires installing correctly the Mapserver Software with its php mapscript extension.

The system is composed of a Map viewer, a Layer Management tool and a Mapfiles manager.
In short to create a map:

It is advised to read the MapServer Documentation on how to install and operate the MapServer software. Some specific information to enable Mapserver inside Tiki is in Maps Admin.
alias
History Source Comments
Slideshow